Take heed, lest you fall 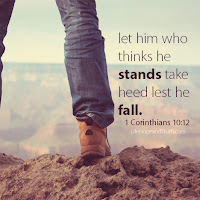 Have you ever found yourself thinking "I'd never do that", or "I'd never go that far", when hearing some horrific sin a person has done? I have thought that, and I doubt there are many people who haven't thought similar thoughts at some point in their lives.

But if we walk away from God and do our own thing, or if we never come to God in the first place, there is no limit to what we might do.

Athena Nichols had a rough life. She walked across the country all by herself at a very young age. She had multiple men in and out of her life for years, and was into drugs, alcohol, and only God knows what else. Some years back - 6 or 7 or so, a lady from my church ran onto her and invited her to our church. She started coming fairly regularly and eventually found God and did very well for a while. Her testimonies were refreshing and honest with none of the "Christianease" used by so many of us raised in the church. Then she started missing church, getting around the life she had left, the kind of men she hung out with, etc. Soon she wasn't coming at all, and her Facebook posts became so raunchy and also so defensive of marijuana, that I deleted her.

Saturday evening, July 16, shots were heard fired from where she was living with her boyfriend. Police arrived to find Athena dead and her boyfriend in critical condition, victims of a murder-suicide attempt. Drugs and drug paraphernalia were found all over their house. This 46-year old woman leaves behind three children as she slipped out to meet the God she had walked away from in favor of her previous lifestyle.

Steve French had a promising life and career as owner of the successful Southern Gospel group he also sang in, The Kingdom Heirs. In addition to traveling all over the country, he and his group regularly performed at the popular Dollywood in Pigeon Forge, TN.

Two years ago, he suddenly left this group he owned and sang in without any explanation given. It turns out he was having an affair with a woman who worked at Dollywood and left his wife for this woman. Details are sketchy as to what they did, but last month as he and his girlfriend were on the run from the police, they both jumped off a bridge to their deaths to meet the God he had served for so long but had walked away from. 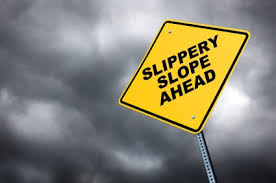 There have been Christians who have lost their ministry, families, and even their lives because of sexual sin. There have been Christians - even ministers - who have been caught having sex with minors, and other horrific sins and crimes. None of these people ever thought they would end up where they did, doing the things they did.... but they did do those things and did end up where they did.

The devil is sly and hates God and we who serve Him. He will do anything to take us down, and once he starts us cutting corners, he starts us down the slippery slope of sin that will take us where we never thought we would go.

If we don't continue to walk in obedience with God and live as close to Him as we can, none of us knows where we may end up. Our fate could be the same as these two I have mentioned, or worse, if we go our own way and let sin rule in our lives again. May God help us to serve Him faithfully and never give in and let sin back into our lives. 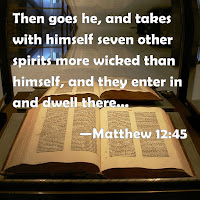 43 “When an unclean spirit goes out of a man, he goes through dry places, seeking rest, and finds none. 44 Then he says, ‘I will return to my house from which I came.’ And when he comes, he finds it empty, swept, and put in order. 45 Then he goes and takes with him seven other spirits more wicked than himself, and they enter and dwell there; and the last state of that man is worse than the first. So shall it also be with this wicked generation.”
Posted by Mark at 12:15 PM