We are all frogs 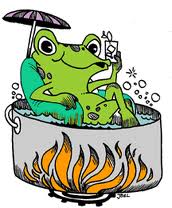 I have never tried it, but I have read and heard that you can boil a frog to death in a pot of water, and they just sit there and let it happen. You simply slowly increase the water temperature, and they adjust to it until they are dead, boiled to death.

It seems crazy to imagine that happening, yet we are all frogs. We all, Christians included, sit back and get used to things, sinful things, horrible things, and slowly we are being boiled to death in apathy and we don't realize it.

There was day when people living together, having sex outside of marriage, was called what it is: sin. We are so used to it anymore, that a lot of Christians don't even consider it wrong.

There was day when homosexuality was hidden and was a sin. Now, thanks to the media, Hollywood, and liberals, it is paraded in our streets, shoved down our throats, and anyone who dares speak the truth is hated and called a bigot. Countless Christians are lying down and not just tolerating it, but tossing out what the Bible says.

There was day when people who cursed were looked down on. Certain words were bleeped out on TV and radio. Now they are shouted from the housetops, appear regularly on TV, radio, and books...... even Christian books, and we got used to it.

There was day when dressing, or undressing, and showing too much skin was looked down on and could get you in trouble, now even Christians show off more of their bodies than what they cover..... and you're considered legalistic or a freak if you bring up modesty.....so we got used to nudity


We are used to crime and killing, used to sins that used to be whispered about, but are now out in the public eye.

We are used to sex on TV and movies, in books, about it being encouraged in our youth.

We have gotten used to people dressing and looking what only whores on the street corner used to dress and look like...... and we have followed along.

We have gotten used to body piercing, tattoos, people looking like freaks, and we have joined in and call it judging of anyone who has not embraced it.

We are used to teens having sex and having babies.

We are used to drugs, alcoholics, used to violence.

We are used to presidents and other politicians lying and abusing their office.

We have become used to too much.

We read about countries and societies in the past and present where things like child sacrifice is common and encouraged (basically what abortion is), where trafficking in humans is the norm, where sex between adults and children is fine...... and we are shocked...... but how long before it happens here and we become used to it? We are frogs, people who just get used to sin and evil, so what makes us think we would do any different with sins that society still deems wrong....... when society changes their views, we toss out the Bible and go with society and allow the temperature to be turned up a little more and come closer to being boiled alive.

God never gets used to sin. He never accepts it because popular opinion does...... I don't want to be a frog. I want to be awake and not used to sin. Yes, we must love the sinner, but we won't do that by clamming up about sin or patting them on the back and allowing them to believe the Bible was wrong....... its time we frogs got out of the pot, and got in the Bible instead...... it is the only hope for America to get back to the Bible and go by what God says, not what politicians, organizations, and even what the church says. Let's stop being frogs.
Posted by Mark at 10:38 AM No comments: