Getting our hands, or carseats, dirty 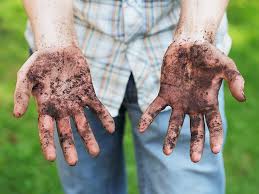 I did something yesterday that I don't normally do. I was on my way home from work and just past the Austintown exit on Rt 11, a 4 lane freeway, I spotted a man walking. It was cold and snowing a bit, and I felt like I should offer him a ride, even though he wasn't hitch-hiking. He gratefully climbed in and I told him I could take him as far as Lisbon, where I live, 30 miles down the road. He was headed for East Liverpool, 16 miles past Lisbon, and had been walking from Cleveland. He said he had spent the night under a bridge. He chatted a bit, but it was a mostly quiet 30 miles. At one point, he asked me who was singing on the CD I had playing. I told him it was a gospel group named the Isaacs and he said they sounded nice.

As my exit came up, I felt like I should get him some coffee and something to eat, kind of brought on by the fact that he most likely assumed I was a Christian - the gospel music. He gratefully accepted my offer, so I stopped at the gas station/convenience store right off the exit and bought him some coffee, a sandwich, and some chips and was on my way.

He didn't appear to be very clean, and also smelled, so when I got home I put a new air freshener in my car and sprayed the seat with Lysol.

There is a reason I stopped and picked this man up. I have been thinking a lot about this idea of getting our hands dirty. Too many Christians, myself included, go through life living our Christian life and rarely go out of our way to witness or help people in need. We do it if it doesn't involve getting our hands dirty, if it causes no discomfort on our part, or takes up time we would rather spend doing something else. I tell this story not to lift myself up, for I don't do enough. There are some Christians who do more, but I'm afraid our churches are filled with people like me. We want to live for Christ and be like Him, but not in every way.

We can dress modestly and look like the gender we are, we can have great attitudes, go to church regularly, and be next to perfect......... but if we never step out of our comfort zone and help people, love the unlovable, and really do something  worthwhile, we really aren't much like Jesus after all. He got His hands dirty. He visited the outcasts, the down and out, the lepers and other undesirables. Can we do any less?

I am friends with a dear lady named Pat. She is a wonderful Christian woman whose oldest son is gay. He openly lived the gay lifestyle for years, and she loved him and his friends. She'd visit him and treat his gay friends like they were someone special. Not sure if she still does it, but she would go around speaking about the issue of homosexuality from a Biblical standpoint, and with her son's permission, talk about him and what it is like having a gay son.... she truly loved the sinner, but not the sin. Too many Christians would run from that. They would be afraid to catch the gayness, or other ridiculous ideas. I sat in a Sunday School class in my own church a few years ago where the issue was being discussed and heard these comments, and others similar: "I'd never let my kids around one of those people." "I'd rather have a murder around my family than one of those perverts." Wow, really?! Is it no wonder people in that lifestyle hate Christians and the church so much? I pity the gay person that runs across Christians with that attitude. They will be all the more turned off by Christianity.

Now I'm not saying we should go around picking up hitch hikers. It isn't always a wise or safe thing to do, especially for women, and had I not felt so strongly that I should, I would have driven by. I doubt my actions will bring that man to Christ, but hopefully he will view Christians and God in a more positive light because of what I did. We don't have to be out there witnessing to every person we meet, though that is great if you do, but we can all reach out somehow to people, even those who seem unlovable or are living lifestyles that are destructive, sinful, and that we abhor. Jesus wouldn't pass them by, so how can we and claim to be like Him?

I fear sometimes we just don't love enough. Yes, we still have to say sin is sin and try to stand against the tide of evil, but we cannot sit idly by and not reach out to people, to help them, love them, and be kind. Even if it is taking a plate of cookies to your heathen neighbor.

Maybe you have read my blog post and you're the exception. That is great. I'm not the exception. I need to love more, reach out more to people, do random acts of kindness in His name. We won't win anyone to Christ unless we love them and touch their lives in some way. This has really been on my mind lately, and I've probably done a poor job of expressing my thoughts, but hopefully I can do better in the future. I may never pick up another person walking along the road, but there are other opportunities that face each of us daily, a chance to show love, and to be like Jesus at His best.
Posted by Mark at 9:07 PM 1 comment: