I haven't blogged in forever, but life has been busy lately. With about 2 weeks notice, I moved into my own place, which I am renting. I moved two weeks ago today, but have been busy putting things together, putting things away, cleaning, alphabetizing my books and CDs, and more. I went a week without internet, other than on my cell phone, and have just been generally too busy to do much of anything not related to the house.

It is different living by myself, as it has been quite a while since I did.... but I am enjoying it. I miss having my mom's cooking every day, but still get some of it at least once a week. I am doing my own cooking, which is different.... and all the cleaning. It feels a bit weird to be in an empty house all of the time, but I am getting used to it. 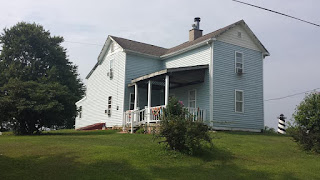 And yes, I am still #nevertrump.. and always will be

And where did this "adopting" dogs and cats come from? You adopt children. You own animals. 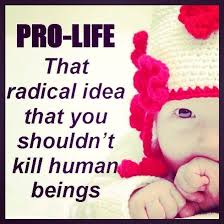 I have a friend who likes to tease me about my becoming a Calvinist. I replied to his latest such post with "I'd become an atheist first", which didn't go over well with another Calvinist..... but it is true. If I truly believed God intentionally created some people to go to Heaven and others to go to hell without ever giving them a chance at redemption, I could not believe in a God like that.... and I'd become an atheist. That is not a God of love, mercy, or justice.... and I believe in a God of mercy, love, and justice. There is no way I could ever become a Calvnist.... I would have to change my views of God way too much.

I don't think much of Joel Otseen and his prosperity and watered down Gospel......but there was a false story circulating about him that he was refusing to open his church to flood victims. It turned out his church was flooded and he couldn't have. We need to be careful to not spread false stories about anyone....even if they are false teacher or a horrible president.

And by the way, why do authors like him always have their picture on the front of the book? What does that say about them........ 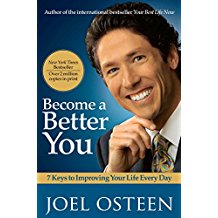 I also alphabetized my CDs. I had a 428 CD shelf almost filled, and found another box of CDs behind me... so I had to re-work the whole shelf. All of my Southern Gospel fit on it, instrumental, and some Christian Contemporary/Praise and Worship. Another shelf holds most of my Christmas, and I have another CD case to put the rest of my CDs on, if I can find the shelves for it.....which seems unlikely since they haven't shown up yet.

I am having fun decorating my place. I had a lot of stuff already, just not as much room to put it, but have also bought a few things. The kitchen, dining room, and both bathrooms are done in a nautical/lighthouse theme. The living room and spare bedroom are done in safari/wild animals theme. My room is rustic/Americana....though I haven't done much with it. I did a whole shelf of Narnia things in my library, but not much else in there other than books.

I have discovered hanging pictures is not my strong point, especially if they require two nails.

And maybe it isn't normal for a guy to enjoy decorating their place, but I am definitely not a normal guy.....whatever normal is 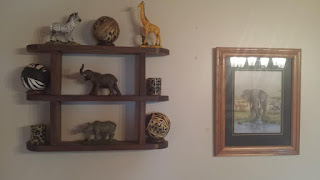 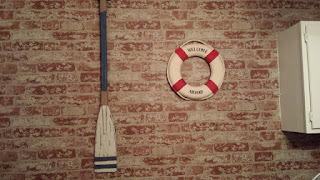 There was a day when any altercation between a black and white person happened, the black person was found guilty......always. That was wrong. Unfortunately, it seems we have reversed that, or liberals are trying to reverse that. Nowadays, the white person (or cop) is always in the wrong when in any kind of altercation with a black person. The media focuses on any such incident, while ignoring black on white violence and threats. That is not progress. It is just exchanging sides of racism. And there is so much focus on the white supremacist groups, while the black hate groups are defended, encouraged, and allowed to do and say whatever they want. 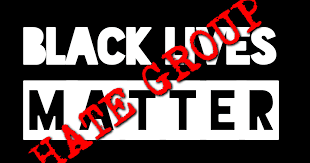 In the animal kingdom, the male is often the more attractive and/or glorious of the two sexes. For example. the lion and cardinal, among others. The reverse has long been said of humans, but I have to wonder if that is true. If women are indeed the fairer sex, then why do they need to put gunk on their faces, lips, and eyes to look better, while we men don't need to do that? Interesting thought, if I must say so myself :)

I have become a pet owner. I inherited 2 kittens, both males.....though someone may possibly take one of them. They are outside cats, as I don't like animals in the house. Don't judge...... there is a barn they can go in when it is cold. They have been driving me crazy. I have kicked and stepped on them because they are constantly under my feet when I am outside. They try to come in the house, and even climb the screen door and go in a hole in the top screen. Were it not for hoping they keep the mice away, I wouldn't have them.

We knock liberals and the "gay Christian" community for ignoring and twisting Scripture, but don't we all ignore Scripture? No, I am not excusing or approving of them doing it.

The Bible has much to say about how we treat others. Love your neighbor as yourself, don't offend your brother, do good to those who use you wrong, and on and on...... but how many of us actually practice that?

I am as guilty as the next person, but am going to give an example:

This past election, for some reason I'll never figure out, the party of conservative Christians and morality picked a man who was as far from being good as any Democrat they ever called out for the same things they ignored and/or defended in him. If you dared speak out against him and point out  the double standard, you were not treated very well. Other Christians outright lied and said you were for Hillary if you didn't vote for Trump. I was told I was not on God's side if I wasn't for Trump. I had Christians tell me to shut up, and more. Some made it  their mission to point out how wrong I was, that I was stubborn, holier than thou, and more. I won't list the ways I was put down and everything that was said to and about me because I felt I could not vote the way they expected and demanded I do. 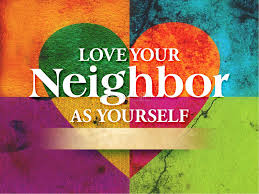 OK, now no matter where you stand on Donald Trump, put politics aside for a moment and think as a Christian... not as an American. Does that behavior really line up with what the Bible says about how we are to treat others? But Hillary....... but, but, but.........we always make excuses, while looking down on people like the gay person going around Scripture.

When did politics and getting the man elected we want become more important than how we treat someone? When did winning an argument become more important than being and acting like a Christian? When did it become acceptable for us to act like jerks on social media? Which is a priority for God: getting the man in office that we think should be, or treating others as we would like to be treated and as how God would want?

I believe the problem is we have become too worldly minded, and too American minded. I asked a friend who was pressuring me to vote for Trump in reply to something he asked " are you asking me that as an American, or as a Christian." His reply, "can't it be both?" And therein lies a lot of the problem. We are not Christian first, and then American. We equate the two, and too often lean towards putting our American part above the Christian.......though we would never admit to it.

We love our freedoms and comforts too much. No, I didn't want Hillary..... well, I didn't want Trump either.....but I still feel it would have been wrong of me to vote for him, for a few reasons. I want to preserve our freedoms, but what if we do so at the cost of our souls or our Christianity?

Could it be we love America too much?

It does seem we view everything in light of what is best for our country and freedoms, instead of viewing things in the light of eternity and through the lends of God's Word. 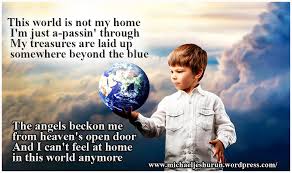 I have a confession: I love used stores. I really like used stores. I like shopping there for books, CDs, DVDs, furniture, clothing.....you name it. I don't know where I'd be without them now that I have my own place. I bought 3 end tables, a lamp, a 2 drawer cabinet, a dining room table with four chairs ($40), and probably a couple of things I forgot about. And then there is the 2 pair of work pants I just bought at Goodwill. I definitely scored. :) 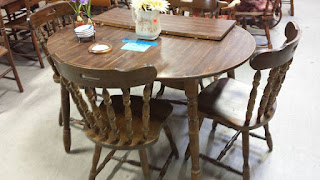 Amid all the craziness of moving and getting settled in -  man, does it take a long time to get everything put away and in place - I went a concert a week ago Friday. The Whisnants are a favorite group of mine, and they were 45 minutes away. The concert started at 7, and I got off work at 5:30, so I took a change of clothes and went from work and met my parents there. It was a great concert, and I got my picture taken with the whole gang.

From left to right: Austin Whisnant (23) who plays the bass guitar and sings some. He and his brother have done 3 CDs together. Jeff Whisnant, his wife Susan, me, Aaron Hise (tenor), and Ethan Whisnant (20) who also sings some. 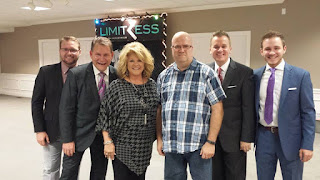 And that is all for now. Hopefully I won't take so long to blog again.