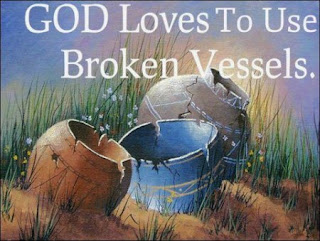 I can't be the only person who has struggled with the idea of God using me. The devil uses all kinds of things to fight us and discourage us, and I am sure he tells other Christians the same thing he tells me: I have messed up too much, I have failed too much.....God can never use me now.

It is something I have been praying about, for God to use me; but I always have that niggling thought floating around in the back of my mind that it may be too late, I am too old, etc.

There's Judah, who slept with a prostitute who turned out to be his daughter-in-law. Instead of using the lineage of Joseph, the more "perfect" son of Jacob to bring His Son from, God chose to do it through one of the illegitimate sons that came from that illicit union.

Then there is Rahab, the prostitute who is also in the lineage of Jesus.

Moses, who killed a man, doubted God, did what God told him not to, yet God used him in a mighty way.

David, who pretty much forced a married woman to have sex with him, and then had her husband killed to cover it up.

Abraham lied a couple of times, and took matters into his own hand in producing an heir because he didn't trust God.

If you look closely at the people God used in the Old Testament, not too many of them measured up too well. They failed God, they doubted God, they messed up after God had forgiven them; and God still used them.

And even in the New Testament there are people who messed up and God used them to build His Kingdom and church. 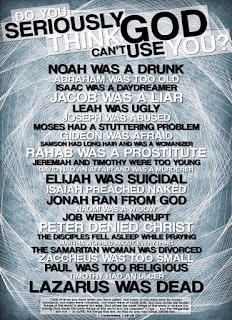 If you look at the long list of people God used in the Bible who were far from perfect, one might come to the conclusion that God delights to use and prefers to use messed up people. Seem like a stretch?

A lot of these people wouldn't be welcome in our churches today. Paul, the man who killed Christians, Rahab the prostitute, Judah, Ruth a foreign idolater, Moses the octogenarian who doubted ..... and the list goes on. If you read what the New Testament church was like, it was filled with people who had issues: homosexuality, idolatry, incest.....and God chose to build His church on people like that; not "perfect" people who had it all together,

And if God seemingly preferred to use messed up people back in Bible times, then could the same thing possibly be so today? Could it possibly be that God could better use me, this broken vessel, this very messed up Christian; more because I am so far from perfect; than if I was the "perfect" Christian?

I have long felt God wanted to use me in some way because of the struggles I have and deal with. That is one of a few reasons why I came out of the shadows. How can I ever use my struggles to help anyone if I stay in the shadows and no one knows what I deal with? Others have risked judgement and being ostracized and came forward to admit these same-sex attractions. God has used them, and I have been helped and encouraged by many of them..... so how can I ask God to use me and not be willing to do what they have done? 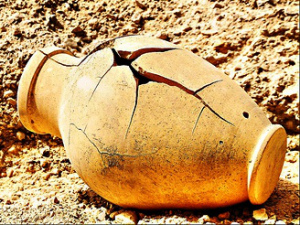 God can do anything, including taking broken messed up people, and using them in ways they could never have been used if they had not been broken and messed up.

I mean in no way to infer that God cannot and does not use people who are not messed up and broken vessels..... He can and does use anyone. I however, am encouraged by the thought that He may prefer to use broken vessels, of which I am definitely one. 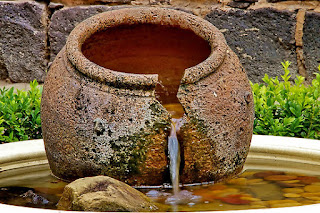