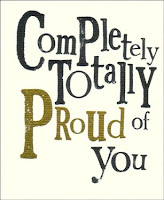 Have you ever considered the fact that God might be proud of you? If you haven't, it was new thought to me also. I spent most of my life believing that God didn't love me, nor even really liked me, so the idea that He may be proud of me is way out there beyond anything I ever considered.

I heard a song this morning on my way to work that I have heard countless times over the years, but it got me thinking along these lines:

Now we have a Heavenly Father
Who loves us even more
He watched over all His children
As they face their earthly toils
And I believe He smiles with pride
Every time we overcome
I believe He stands and looks over Heaven's portals
And proudly says, "that's my child."

We see God exhibit different emotions in the Bible: anger, jealousy, pleasure; so is it really a stretch to say He would be proud of us? 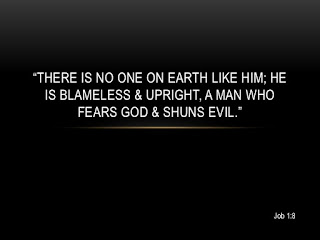 Job 1: 6-8 says:
6 Now there was a day when the sons of God came to present themselves before the Lord, and Satan also came among them. 7 And the Lord said to Satan, "From where do you come?"

So Satan answered the Lord and said, "From going to and fro on the earth, and from walking back and forth on it."

8 Then the Lord said to Satan, "Have you considered My servant Job, that there is none like him on the earth, a blameless and upright man, one who fears God and shuns evil?"

Not only was God proud of Job, but He bragged about Him. I doubt God has photo albums, but if He did that is when he would have whipped it out and started showing pictures of Job. If God was proud of Job, then isn't it highly likely that He is proud of His children today in 2016 who are serving Him faithfully?

This is truly a unique and new thought for me that God could possibly be proud of me. I tend to view myself as a failure and have a hard time getting past that kind of thinking, but we tend to judge even ourselves by the wrong things: how successful we are in life, what kind of car we have and how new it is, what kind of house we have...or if we even have our own house, what kind of job we have, how much money is in our checking and/or savings account, etc.

But look at Job. He was a very rich man. His possessions were many, and he was most likely a very popular and well connected man in his day. But that isn't what impressed God: "Have you considered My servant Job, that there is none like him on the earth, a blameless and upright man, one who fears God and shuns evil?" God isn't impressed by how successful we are financially or by what kind of car we have. He is impressed and proud of us when we serve Him faithfully, flee temptation, put Him first in our lives, and live a holy and blameless life. 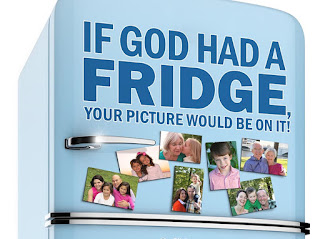 Max Lucado said if God had a refrigerator, your picture would be on it. We photograph important occasions and moments in life. We take pictures of friends and family as they graduate, as they start little league or high school football, as they get awards and trophies. If God did have a refrigerator, imagine the pictures He'd have on there:

The woman who forgave her husband for cheating on him.

The young man who quit pornography because Jesus was more important to Him.

The couple who left everything to serve God on the mission field.

The girl who faced ridicule and a failing grade to do the right thing.

The one who has fallen yet again, but has gotten back up to keep going on,

The people who day after day resist temptation, deny themselves, carry their cross, and truly give their all to serve God.

If you are serving God with all you have, denying yourself, carrying your cross, and truly putting Him and His will above all else..... God is proud of you. As you resist temptation, as you seek His will above your own, as you do that very difficult but right thing; He may just then be bragging about you. "That's my child, look at what they are doing for me!"

Mark
I live in East Palestine, Ohio. I am single, and am uncle to the six greatest kids in the world. I enjoy blogging about Christian fiction, my family, Christianity, and the events of my life If you are an author, particularly Christian fiction, and need someone to review your book, give me a holler.