A visit to the emergency room, a re-post 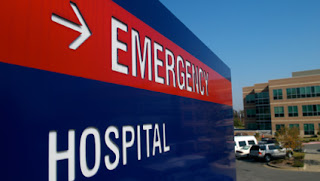 I posted this five years ago on my other blog before I separated my book reviews and my regular blogging into two separate blogs. I ran across it today and decided to post it again.

Last night, I developed a bad pain in my side. It wouldn't go away, so I quickly researched on the internet. Great - most likely my appendix. Something that definitely needs attention. Emergency room, here I come....

I drove to the nearest hospital, wincing with the pain. Walking into the emergency room, I groaned inwardly. The room was pretty full. I walked over to the admissions window, and waited until the woman seated there looked up. Before I could speak, she asked "What is your ailment?" "I think it's my appendix. I.." She brusquely intterupted me. " Find a seat and fill these papers out." With that, she was back to reading the novel in her hands. I sighed, and found a seat beside a man clutching a hand that was wrapped with a blood-soaked cloth. "Hey man, how long have you been waiting?" He shifted pain-filled eyes to me. "Going on two hours, and this is ridiculous!' He launched into a tirade against the hospital, so I began filling out my paperwork.

A few pages later, I walked up and handed my paperwork to the novel-reading woman at the window. Without looking at it, she tossed it onto a tall stack of papers, and went back to her novel. "Ma'am, do you have any idea of how long the wait will be?" She looked up with annoyance. "Nope", and went back to her novel. I walked back and sat beside Mr. Bleeding Hand again, and looked around the waiting room.

Everyone looked irritated, and most looked like they were in pain. There was a young man in his early 20's who looked like he had been in an accident. His face and arms had several cuts and lacerations, which he kept dabbing at with a rag that looked like it had seen better days. From the blood spots on the floor, he wasn't succeeding at getting all the blood. 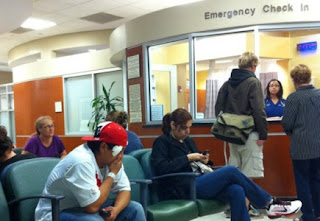 Beside him, sat an older man, clutching his chest and breathing sporadically. A woman that I assumed was his wife, sat on his other side, holding onto his arm and looking worried. Next to her sat a woman holding a small child who was crying his eyes out. Even from where I sat, I could see bruises all over the poor kid on any skin revealed. My perusual of the room halted as a well-dressed woman walked in. She viewed the room with disdain and walked rapidly to the admissions window. Novel-reader looked up. "Your ailment?" The other woman looked at her haughtily. "None." I watched with amazement as the admissions clerk laid down her book, and looked with interest at the woman. "Great. The doctor will see you immediately. Go down the hall and go into room #4, second door on the left." I watched aghast as the woman marched down the hall leaving a room of hurt and sick people. What on earth?!

Shaking my head in disbelief, I continued looking around the room. Yikes! My eyes fell on a teenaged boy with an obvious broken leg. The fractured bone was sticking out through his skin. His face was contorted in pain. A couple I assumed was his parents flanked him on each side rubbing his shoulders, while shooting frantic glances at the admissions window. As I watched, the father walked to the window, but was turned away with a brusque "you must wait your turn." I watched the family with sympathy until the pain worsened in my side, reminding me of why I was there.

A noise at the door drew my attention. A large family walked in the door and headed for the admissions window. I quickly counted. One, two, three, four, five children. Who takes their whole family to the emergency room.?  My heart sank. Could a whole family be that sick? But they all acted and looked healthy. I listened intently as Linda (I had finally learned her name) looked up. "Alright, who has what ailments?" The father announced louldy (and proudly, I thought) "No one is sick. We are all 100% healthy!" Linda looked extremely pleased, and paused for a moment. "Ok, go down the hall to room #7 - it is our family-sized room. The doctor will see your family right away." I couldn't believe it. Was I in the twilight zone or something? This didn't make a bit of sense. 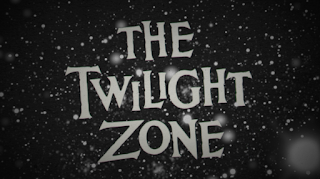 Evidently the father of the kid with the broken leg didn't think so either, for he headed for the admissions desk again. "Listen uh, Linda - my son is in extreme pain, and we have been sitting here for an hour while you keep ushering in perfectly healthy people. I demand that you have a doctor see him immediately!" Linda looked at him with disinterest. "Go find your seat sir." And went back to her book. Or tried to. The irritated father reached in, yanked the book from her hands and threw it over his shoulder. "Now listen to me you useless, stupid woman......" That was as far as got, as two large men in suits approached him. "Is there a problem, sir?" Looking relieved to finally get some attention, he quickly explained the situation - "My son has a bad leg break, and I see all these healthy people going back to see the doctor. Why won't they admit my son?!" The two men exchanged a look, and the older one spoke. "Sir, I would advise coming back when your son is healthy. You can wait over there, or go home and come back later." The father looked dazed and angry. "Come back when he is better? What are you, a lunatic? This is a hospital!" He muttered a few curse words. Everyone watched in amazement as the two goons grabbed him and escorted him from the building.

I sat puzzled - and worried. If they wouldn't see the boy with the broken leg, surely I had no chance. What kind of hospital refused to see sick and hurting people? The man beside me with the bleeding hand stood to his feet. "I'm outta here man. I've been coming to this church for two years, and no one ever wants anything to do with me. My sins aren't "nice" sins, so they ignore me and focus on the "perfect" people. The ones who have it all together, and look just right." Wait, this was a church? Not a hospital? I looked around again. I saw no illness, no broken leg, no blood. I did see empty eyes, broken lives, people hurting from wounds that no one could see. And the ache in my side? I realized it was in my heart. An ache that hurt worse as I realized that I was another broken life that the church had no time for. 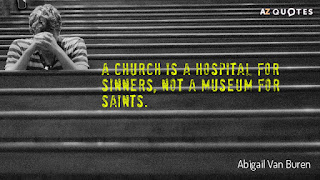 I looked at the people in the waiting room with new eyes. That wasn't a young man with a broken leg. It was a young confused guy with his male lover at his side. They seemed to be the most avoided. And that wasn't a young woman with a baby. She was a used woman with needle tracks all over her arms. I looked at the guy standing by me. His hand wasn't bleeding, but in one hand he held a can of beer, clearly not his first, and was that a porn magazine sticking out of his back pocket?

I grabbed my jacket and stood also. "You know what pal? You're right. I don't want to be here. I don't fit. Let's go have some fun and forget about this church thing." Besides, he looked like he needed a driver. As my new friend led the way, I looked around with disgust. Maybe I should try that hospital - I mean church - on the other side of town. Maybe next Sunday......

When Jesus heard it, He said to them, “Those who are well have no need of a physician, but those who are sick. I did not come to call the righteous, but sinners, to repentance.” Mark 2:17 NKJV


**Disclaimer: This is aimed at the church in general, not at any specific church.
Posted by Mark at 2:32 PM