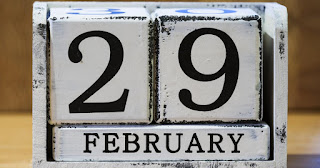 Ever wish you had an extra day? If so, what would you do with it? Catch up on laundry and housework? Read? Binge on Netflix?

Well, guess what.... you do have an extra day. We all do. This is leap year, a year when an extra day is tacked onto the month we are in, February. It is also the year that women are supposedly allowed to ask men out, instead of the way it has been done traditionally. That actually happened to me 3 leap years ago. I have no idea if it was because of leap year, but a young lady at least 10 years younger - possibly more like 13 - asked me out on a date. She even knew my issues and why I was single, and was still interested in me. Did I mention she was blind? Just kidding....but it was a surprise. And I said no, because I knew it would never work out.

Four years ago, I penned (typed?) a similar blog about having an extra day. I decided then to do what I am going to do with my extra day this year. Seriously, if we have an extra day, shouldn't we do something different or special? Granted, the extra day is the 29th, and I will be doing something special on the 24th. And the 25th.

The Amish part of Ohio is about an hour from me. Well, since I moved, it may be a little further. There is an inn there called the Dutch Host Inn that has what they call package deals during their slower times. The idea is to draw more people in than they would normally have. My one sister and her husband had done it a few times, and my parents also had done it. I looked it up, and the prices were for couples. So, I called and asked if one person could do it, and not only could they....the inn knocked $10 off for one person. So I made the reservation, went, and had a jolly time.

The prices are different, depending on when in the week you go. Monday and Tuesday are $94.95. $84.95 for me :) - Thursday and Saturday are $104.95, and Friday is $114.95. The price includes one night's stay at the inn, plus a bunch of free stuff. I have done it a few times now, and I try to get there on Monday morning around 9:00. I check in, and get my packet of coupons  for places all over the area, covering different towns. 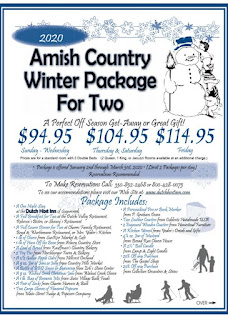 This year, this package inclcludes:

Breakfast at your choice of 3 different restaurants

A pound of cheese

A pound of ham off the bone

A loaf of bread

9 oz jar of jam or jelly

A bottle of BBQ sauce or seasoning

a pair of socks

a personalized bookmark or pen

a jar of mustard (yuk)

20% off purchase at a Christian bookstore

20% off purchase at Collectors Decanters and Steins (doubt I'll use it, though I did get a couple of magnets there once)

Each of those items is from a different business. I have added up approximate totals, and it comes to more than what I pay for the room. Some things, I know what they cost. The BBQ sauce is $7.99. The two meals come close to $30. It is well worth it.

I love the area, and am hoping the weather is nice enough that I can park and wander the streets of Berlin, my favorite town over there. There is a used bookstore in Millersburg, OH I discovered on my last trip over there, and I am planning on going there again.

I always hit the majority of places Monday. You can't get in your room til 2, so I head back to the inn around that time. I relax, look over my treasures I have accumulated, then head for Mrs Yoders Kitchen in Mt Hope, and get their buffet......which has awesome fried chicken on it. I then head back to the inn and read and/or watch a movie.

I get up Tuesday morning and hit the Dutch Valley Restaurant for their breakfast buffet. It is the closest of the 3 restaurants available for the free breakfast, visible from the inn. I then go out and hit the remaining places I haven't been to. The place offering the free fry pies is not open on Mondays, so I have to save it for Thursday.

Maybe I am the only one who needs an extra day, a day to get away from it all. Life has been rough lately. My depression is worse than ever, and that is with medications. The way so many have acted towards me for daring to oppose a president with an R by his name has made it worse, along with the constant praise and defense of such a corrupt bully. No one may understand why and how, but the whole politics and Trump over Christianity and how people are treated has torpedoed my faith. People in my own church who won't shop on Sunday or watch TV, along with a lot of outward stuff, don't care about honesty and attack anyone who disagrees with DT...false accusations and attempts to squash freedoms of speech abound from those who are supposed to be like Jesus, but act far from it. I have no confidence in my church or its teachings anymore, and evangelical Christianity has been hijacked by politics and a corrupt billionaire. Christians defend and are OK with adultery, strip clubs, sexual assault, vulgarity, etc.....and even what Trump is guilty of but got acquitted for.....yet still rail against the sin I battle daily....and for what? False accusations and attacks on me and others for daring to hold a politician to the same standards they used to. Losing my faith in my church, its teachings, evangelical Christianity, and the Republican Party hasn't all been bad.....it has shown me that Jesus is all that matters. Being a true Christian isn't anything to do with my church, its teachings, American Christianity, conservatism, etc....it is about a personal relationship with Jesus Christ. So many Christians in my life have no idea what I am battling daily. If they knew, I hope they would change and stop the false accusations and lies......but the blind loyalty to a corrupt politician is an obsession so radical, that I fear nothing would change. I have true concerns about how obsessed so many Christians are with DT, to the point that defending him is more important than being like Jesus and how they treat people.

Didn't mean to get political, but that stuff is taking a toll on me, and getting away from it is important and necessary.

I need to get away from all that. Yeah, I have un-followed a lot of people and political pages......but I need a day for just me that I focus on having fun and mental health. I love the area over where I am going, and I love to shop. Hopefully my tax refund will have come by then, which will make it even better.

Email ThisBlogThis!Share to TwitterShare to FacebookShare to Pinterest
Labels: random thoughts, vacations/days off

I have been reading a lot of Christmas books these last couple of weeks, some of them for the second or more time. One book in particular... 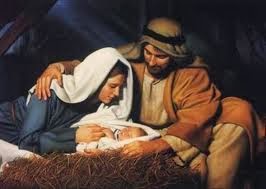